Expansion of our vacuum hardening

The Eagle has landed … Just arrived after an long RoRo Trip from Japan our new IHI LPC Vacuum Furnace 2 and 3. Ready to rock your high precison gears in the next months. 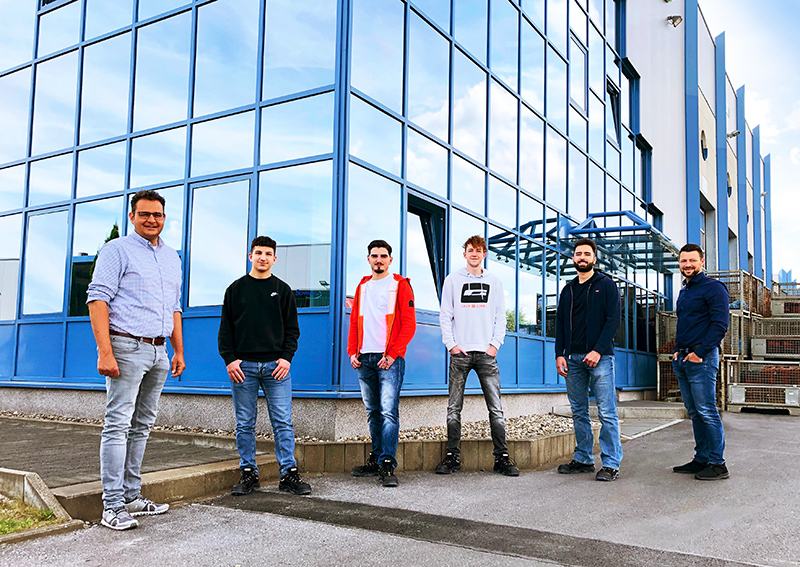 Here we present our Schmahl image video on Youtube:

AGRITECHNICA – The World’s No. 1

The world’s largest trade fair for agricultural machinery and equipment

Innovations in agricultural machinery and equipment and the latest solutions and concepts for the future of plant production were presented at the AGRITECHNICA in Hanover, Germany from 10 to 16 November 2019.

It is the world’s leading exhibition for agricultural machinery and equipment. We can look back at a successful presence at the exhibition and thank our customers and the visitors for their great interest in our products.

Read the article from the latest edition of the trade journal MAV (Maschinen, Anlagen, Verfahren) here: 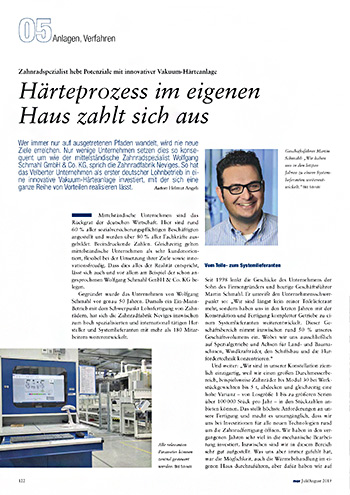 INNOVATION FOR THE BENEFIT OF ALL

Those who only ever follow well-trodden paths will never reach new destinations. Only a few companies bear this in mind as consistently as the medium-sized gear specialist Wolfgang Schmahl GmbH & Co KG. The company from Velbert, Germany, was the country’s first service company to invest in an innovative vacuum hardening plant, which delivers a whole range of advantages.

Medium-sized companies form the backbone of the German economy. Around 60 percent of all employees liable to pay social insurance are employed in this sector and over 80 percent of all skilled workers have completed relevant training here. Impressive figures. At the same time, medium-sized companies are considered to be very customer-focused, flexible in the implementation of their objectives, and innovation-friendly. The reality of all this can also and above all be illustrated by the example of Wolfgang Schmahl GmbH & Co. KG.

The company was founded exactly 50 years ago. When his employer of the time gave up the contract manufacturing of gears in 1969, Wolfgang Schmahl filled the gap by becoming an independent contract manufacturer of gears. He purchased a gear cutting machine (which, by the way, is still used for special tasks) and founded Zahnradfabrik Neviges gear factory. 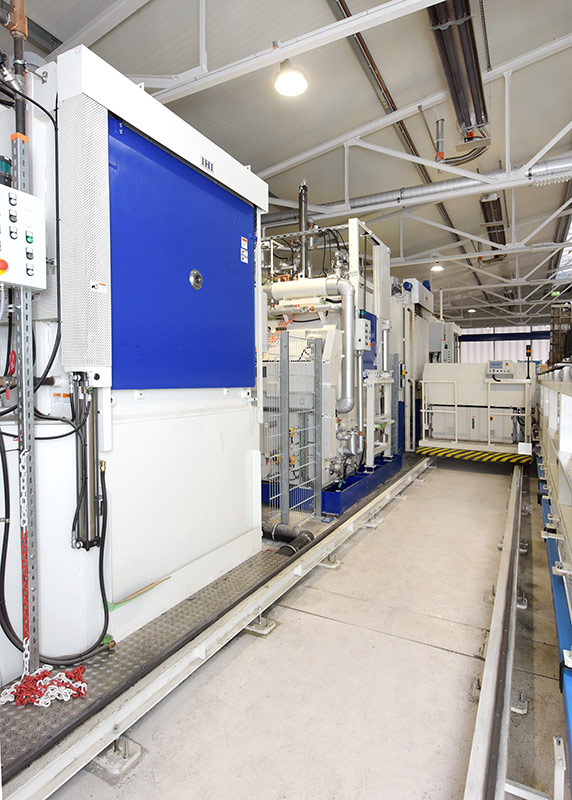 This was a smart move, as can be seen by the company’s subsequent development. Since then, Zahnradfabrik Neviges has developed from a one-man operation into a highly specialized and international manufacturer of gearwheels and a system supplier of complete transmissions. Today, the company employs more than 180 people on a production area of 10,000 m2.

Martin Schmahl, son of the company’s founder and the present managing director, took over in 1998. He describes the company’s purpose as follows: “We stopped being a pure supplier of parts a long time ago and in recent years have continuously developed ourselves into a system supplier with the design and production of complete transmissions. This area of the business now accounts for around 50 percent of our business volume. We focus entirely on special transmissions and axles for agricultural and construction machinery, wind turbines, shipbuilding, and industrial handling equipment.”

He continues: “We are pretty unique in our field because we are able to cover a large range of diameters, such as gears up to module 30 with workpiece weights of up to 5 tonnes, and at the same time offer a wide variety of quantities (from a batch of 1 through to larger series of over 100,000 units per year). That places high demands on our manufacturing facility, and makes it essential for us to be open to all new technologies related to gear manufacturing when making investments.”

He continues: “We have invested a great deal in mechanical machining in recent years. We are now very well set up in this area. What we always lacked, however, was the possibility to carry out heat treatment in-house. We often wondered whether it wouldn’t make sense to invest in modern hardening technology, but could not find a truly convincing system on the market that meets our requirements.”
Classic hardening systems were not considered for reasons of principle (subsequent processes, lack of specialists, energy efficiency). Neither did Martin Schmahl particularly like the vacuum hardening systems, which were considered to be a modern alternative: “In conventional vacuum hardening systems, nitrogen or helium gas is used under high pressure for the quenching process. That requires very high-quality materials, as the necessary core hardness could not be achieved with the ‘simple’, i.e. low-alloyed, input materials such as 16MnCr5.” Previously, vacuum hardening had already been used for components at risk of distortion, and the process was known as an alternative to the popular standard carburization processes. However: “We found that vacuum hardening in conjunction with gas quenching using expensive input materials makes no economic sense.”

So why not carry on outsourcing the hardening process? Martin Schmahl: “As a medium-sized company, we obviously do not have the high quantities of large companies. That does not make us particularly attractive for contract hardening facilities. This means that our proposed deadlines were not always accepted, which resulted in our throughput and lead times being unnecessarily long.” So Martin Schmahl and his team continued to search for solutions that avoided the disadvantages of the mentioned hardening technologies on the one hand and allowed the use of ‘normal’, i.e. cost-effective, input materials on the other. One solution presented itself when the company came across the contract hardening shop VTN. Since 2015, the company has been a fully consolidated subsidiary of the Japanese multinational corporation INI, which in turn offers systems and services around the world for heat treatment and surface coating. These include an innovative system for vacuum carburization technology with oil quenching, which was unknown in Germany.

For Martin Schmahl, this was a real stroke of luck, because the technology met Schmahl’s list of requirements right down to the smallest detail. Martin Schmahl: “We very quickly decided to invest in this ultramodern vacuum-hardening technology because it lets us retain all the advantages of conventional hardening without having to live with its disadvantages, and at the same time we are able to avoid the weaknesses of conventional vacuum systems.” In detail: “For example, the post-treatment processes such as blast cleaning can be omitted. As the parts remain in a closed oxygen-free system from the time they are placed in the electrically operated heat chamber through to the time they leave the temperature-controlled oil bath, no scaling takes place because the 9,000 liter, temperature-controlled oil tank is located right below the oven.”

He continues: “Compared to other vacuum hardening systems, we can make use of our standard input materials here. Above all, we have the entire process on our own premises and are able to better control it, meaning that we no longer have to rely on external service providers. At the same time, value creation remains with us: The new system guarantees absolutely even carburization with precise control of the case hardening depth.” The IHI hardening system installed at Schmahl is connected directly to the upstream gear hobbing machine to create a continuous production line.

The automated hardening system at Schmahl now offers an optimized overall system that also covers everything with absolute process reliability for otherwise critical machining steps, such as thin-walled parts. The managing director continues: “On average, we used to outsource around 120 tonnes per month for heat treatment. Our new plant now covers that. The hardening oven, which holds 1,200 kg and is fed by a robotic system that has access to a buffer containing 18 pre-packaged batches, is fed fully automatically. The same applies to the following components, the tempering furnace and washing unit.”

Martin Schmahl summarizes the benefits: “We are still able to work with relatively low-cost input materials and achieve a better result in a shorter time. As the hardening procedure is much less prone to distortion, we can send gears with less allowance for heat treatment, which also minimizes the amount of post-treatment required. This might not have a dramatic effect on reducing costs, but we do achieve a much shorter throughput time as well as better distortion behavior of our products.”

And as if that were not enough: “The process is absolutely dry and dust-free and meets the highest requirements for occupational safety and environmental protection.”